It was a Wednesday, and as a consequence, Piglet was sitting on a log. Mind you, this was his Wednesday log, which is different from his Thursday or Saturday log, although sometimes you found it hard to tell the difference, and so did Piglet.

“Tiddly pom, hum,” he said, since it seemed like the right thing to say when one is sitting on a Wednesday log. Speaking of the right thing to say, it was an afternoon perfect for soft, warmly-spiced apple bars frosted with caramel penuche icing and–

“Were you speaking just now?” he asked, looking up with a slightly mesmerized expression, as I’m sure you’re wearing at this very moment. Because his attention was fixed on this gif right above us, too.

“I think so. Or at least the gif above you was. It was one or the other of us, you know.”

“Oh. I thought somebody must have been.” He paused and twiddled the daffodil that he had been twiddling after his thumbs had been all twiddled out. “And…and who were you speaking to?” “Why–to the readers, I suppose,” I said.

“Oh.” The flower wiggled its petals and worried its stem. There was a pause.

“Not to me?” he asked finally. Piglet considered this. He considered saying “Oh, hooray, and three cheers for Piglet!” but decided that might make him sound what he called “over-eager.” So he said instead, rather randomly, “You know, people like to talk to Pooh very much.”

“But he can be a bear of very little brain–as he says himself, of course,” Piglet finished hurriedly. And then he added, so as not to sound too self-interested, “I admire your the pig cup in your pictures. And the apple spice bars look very nice, too. There’s something about pigs that are very pleasing and nice and…and un-bear-like, you know.” “I mean,” he went on, speaking now to the stem of his greatly worried daffodil, “what does one DO as a Pooh bear?”

“Eat, I suppose. And think about eating. And other Pooh-like things.”

We waited. The daffodil jiggled a little bit as he thought about this carefully.

“Do you think, hypo-thack-tikly speaking, (which was a grand thing to say, because Christopher Robin said it all the time), one–say, perhaps, a pig, or a tiny pig–that one could become a Pooh?” “Well,” I said. “When one wants to pretend like one’s a grown-up, Piglet, what does one do?”

“Wear grown-up clothes and do grown-up things like cook and stay up late and cross the street without holding anybody’s hand,” Piglet said proudly, for he had done all of these things before when he wanted to feel grown-up.

“Precisely,” I said. “And so if one–say, a tiny pig–wanted to be a Pooh Bear, what would one do?” 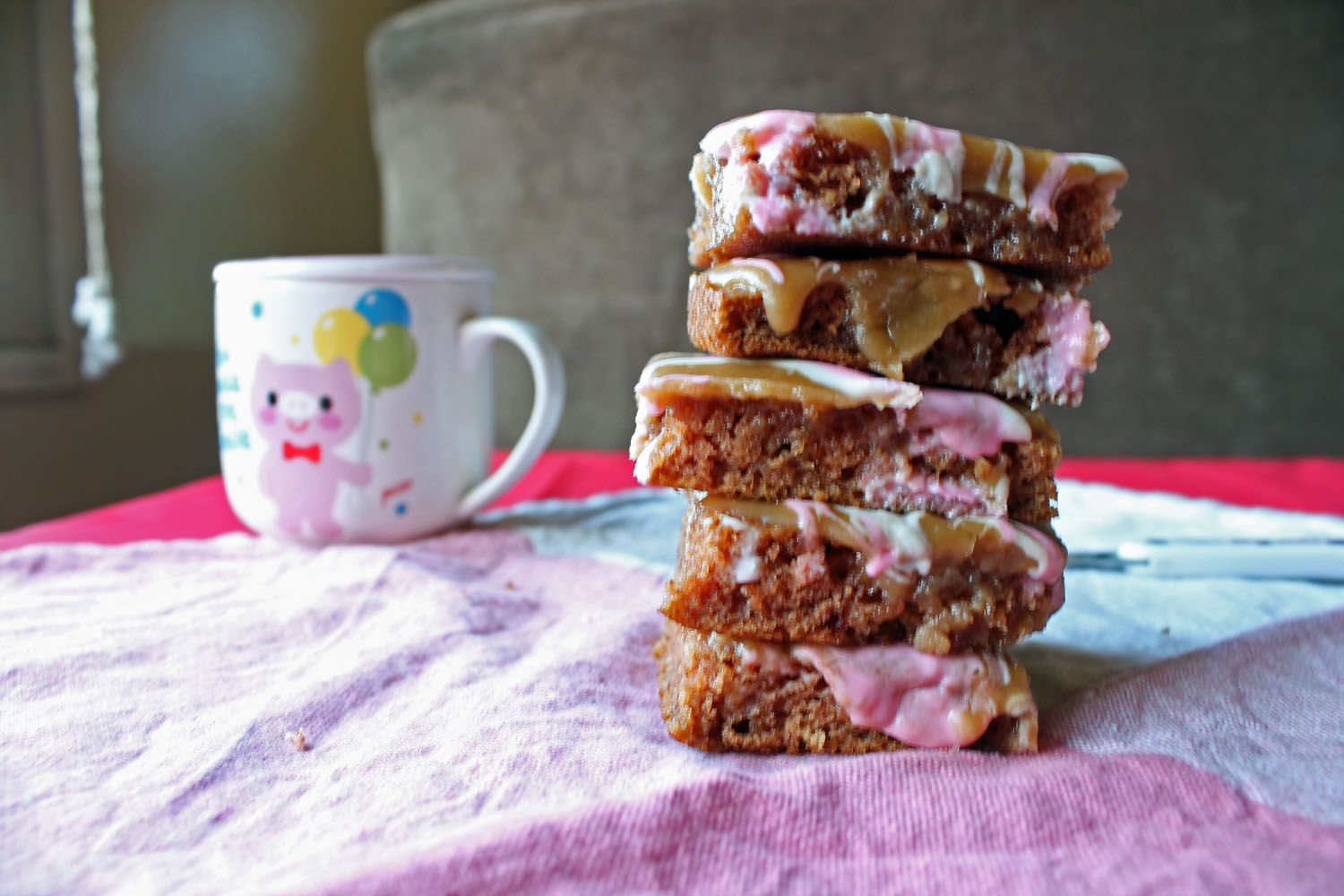 “Aha!” Piglet said suddenly, jumping up from his Wednesday log and casting a longing look at the pan of apple spice bars with rich caramel penuche icing sitting in front of him.

And do you know what happened then?

I’ll let you decide. Although, if I were you, which I am decidedly not (but if), I would look below for a clue. What character would you be from the 100 Acre Woods?

(I apologize for the blurry, pixelated gif this time–it was a rushed day! But I’ll get it right next time around :] )

This post is part of the Lit, Wit, and an Oven Mitt (LWOM) series here at Wallflour Girl, where Ala takes a popular or classic literary character and uses him/her/it to tell a story about her recipes.  Ala is an English literature graduate student with a strong interest in children’s literature, Victorian lit, and everything in between, beyond, bubbly, or burgundy. Ala does not own the rights to any of these characters or original literary texts, although she does own a really cute Winnie-the-Pooh balloon-shaped stuffed-animal. This series is intended to offer you a glimpse into her world through our shared love for food. Please let Ala know what you think of these stories–she’d love to hear what you think (and I’m sure Piglet would, too).