It’s like a Rorschach test–quick! What do you see?

Yup, it’s a panda all right! I knew you’d guess it.

…Okay, I admit–it does look sort of possessed. But at least it’s a possessed panda, right? That could potentially still be cute. Its pet name is Frankie the Panda (Devil) Bread loaf.

How did this Shelley-esque nightmare come into being? Let me tell you…

Our story begins on a cold, stormy winter night, when the wrath of the oven gods decided to wreak their havoc and get revenge on the mortals below…so they sent…

This bread actually emerged from a skewed desire to make something unbearably cuddly and cute for our weekly book club. I’m hosting this week, and so setting aside for a moment the slightly bizarre inclination to eat the face of an endangered animal for lunch, I decided to make this recipe.

Did it turn out the way I wanted? Probably not. But I still think it makes an adorably possessed panda, don’t you think? I’m having my second slice for lunch today with hummus and Greek yogurt, and I’m so looking forward to it. Plus, it’s (surprisingly) one of the best white (or green) bread sandwich loaf I’ve ever made. Soft, airy, slightly chewy, and just a tad of that nice firmness on that outer crust.

Unlike some food bloggers who put out only the very best of their work–we all know those beautiful, amazing photos of jaw-dropping cakes and who-knows-what-went-into-that-cream-puff–I don’t mind sharing, not recipes for disaster, per se, but my own disastrous encounters with good recipes. In fact, I think it’s more fun that way. Possessed panda bread instead of cute, cuddly panda bread–why not, right?

And if you’re still in doubt as to Frankie’s devilishness, take a look at this snapshot from the center of his loaf:

Hehe, that’s my favorite one. Frankie in all his center-of-loaf glory. You can even see the horns sticking out of his cuddly panda head, aww.

Anyway, the girls at the book club will be eating this today while we discuss the Rootabaga Stories written by Carl Sandburg, which is appropriate since they’re children’s nonsense stories, and my bread is nonsense bread.

If any of you want to make nonsense bread, or actually attempt to make this bread the right way (although, until I do so myself, I’m going to be naturally inclined that think that “normal” is overrated), visit the original recipe translation at this site!

When I make this bread again–and I will definitely do that, since the bread is worth eating even if it’s not necessarily aesthetically pleasing–I will repost with the results. Wish me luck! And until then, as always…

Photos from my Panda-Devil-Making Adventures

Microwave the milk and eggs.

Add sugar and yeast to the mixture; stir briefly, and allow yeast to do yeasty things. (i.e. this is the “proofing” stage to make sure your yeast is active.)

Cut your dough into three pieces–two that are roughly the same size, and one that is 1/3 the size of either of the other two. These will be your three colored pieces.

Place one of the large pieces in a lightly-greased bowl and cover with warm, damp towel. Set aside in a warm place. (I placed mine in the oven, which I had allowed to heat for just a few seconds before this.)

Work green gel food coloring into your other large piece of dough. I would used a considerable amount of food coloring (at least 15 drops for this dough–you’ll probably want to use even more to achieve a brighter green color). When you finish, set aside in another lightly-greased large bowl, cover, and place in warm spot.

Work the cocoa/water mixture into your final small piece of dough. If your dough gets sticky, add a bit more flour as needed. When you’ve achieved a nice dark brown color, cover in a lightly-greased bowl. Allow all of your dough to double in size (approximately 1 hour).

When your dough has all doubled, take out the plain dough and cut into three pieces (2 of the same size, and then 1 about half the size of the other two). This will be your panda face! 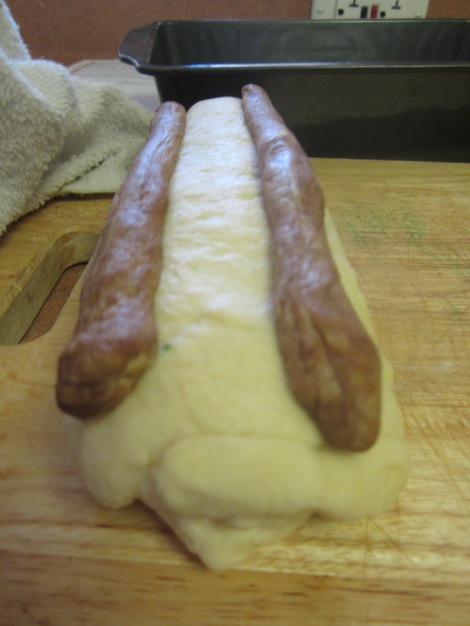 Using the remaining large piece of plain dough, stretch it carefully around the rest of the dough so that it locks everything into place. Divide your green dough into two pieces (1 about half the size of the other). Place remaining two chocolate logs on top of the plain dough–these will be your ears! Then place the small green log in between to keep them in place. 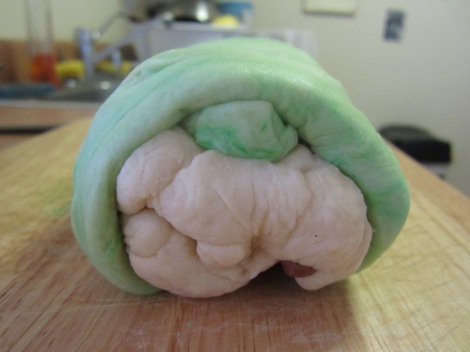 Finally, stretch the last piece of green dough around the whole thing–it’s a panda in a bundle!

Place your dough into a greased loaf pan and cover with damp cloth. Allow to rise for an additional 45 minutes, or until doubled in size (like this).

After baking in preheated oven for approximately 30 minutes (or until golden brown on outside), let it cool–this is important to keeping all of your bread parts together! Otherwise, the various colors might fall apart.

And there you sort of have it! Next time, I definitely need to keep better track of where I position my dough. I’m also pretty sure I flattened it at one point while I was panicking over the time (I had a dinner plan to keep in the next hour, so my dough got a little panda-handled.) I’d also use just a tad more tough for the chocolate parts, to keep the eyes and ears looking like little devilish slits.

Otherwise, I hope all of you have better luck than I did for a first try–I’ll let you know how the next attempt goes!